Following the tracks of the Skirmishes

Lalapanzi Hotel were started in 1947 only by the Stubbs and Wilkinson families, with Julian Rowney a subsequent owner and present owners Marius & Inga Gilfillan & Xanthe Joubert. Lalapanzi were famous for the Bushveld Cricket Club that was started on the grounds and many cattle sales held there.  Famous visitors were Harry Oppenheimer and today our rooms 18 and 19 is where the family stayed in the starting-up days of Lalapanzi Hotel.

The Aardweg family (Roy and Tiekie) still are neighbours of Lalapanzi  Hotel, which is family  of the pioneers of Lalapanzi Hotel.  Their homestead bears the same design and plastering in the old English Tudor style of Lalapanzi Hotel .
The northern regions of the old Transvaal now Limpopo Province was relatively unscathed by the first year or so of the Anglo Boer War. Only during Kitchener’s attempts at bringing hostilities to close by means of his “scorched” earth” policy, and gathering of the last few commandos in this region, did the war move into our area.

Ironically, this relatively unknown and militarily unimportant part of the ZAR, the Zoutpansberg, saw events that involved many – if not most – of the British Empire’s forces in a series of skirmishes (or blatant murders) that left a legacy of accusations levelled against Britain by Australia. It is interesting that as recently as 2002, two more books were published by Australians: Nick Blezinski’s “Shoot straight you bastards” and Bill Woolmore’s “Breaker Morant of the Bushveldt Carbineers”. The classic Australian film produced in 1979 and starring Edward Woodward carries the following text on the cover: “ A true story of injustice and the horror of war. One of the most acclaimed Australian movies ever made!

While Australia and Britain still debate the “injustice” of Australian officers arrested by British troops, court marshalled, sentenced to death , two of them executed by a detachment of the Cameron Highlanders and buried in the same grave, we are left with monuments, graves and other evidence of these atrocities committed towards South African civilians and children. Approximately 36 known murders took place in this region during the period. 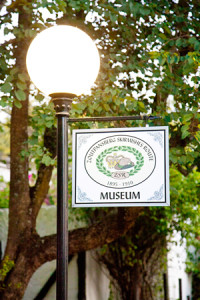 It is against this background that the Zoutpansberg Skirmishes Route has developed. The tour starts at the Lalapanazi Hotel on the N1, south of Louis Trichardt and following the 1903 map of the Zoutpansberg (by Henry Berthoud), travels to the Pioneer Cemetery of the Cooksley, Kleinenberg, Menne and Adendorff families. The old Cooksley homestead still stands and some of the trees that made up Lovedale Park are still there. Tour Guide Charles Leach tells interesting anecdotes of the role played by the Cooksleys and their sons-in–law during the Bushveldt Carbineers saga.

Close to Lovedale Park is the site of the original portable steel Fort Edward, base of both A and B squadrons of the BVC. Details are told at the iron grave markers of the troopers including Trooper van Buuren originally buried here. A most fascinating story, with two tales behind the main story is told at the monument of Constable William Eagle, (died 10 October 1908) the only North American Indian to serve in the old Transvaal Police! Plans are being considered to establish a comprehensive tourism info centre at this very historic site! A new monument in honour of all known and unknown civilian victims was unveiled on 2 June 2006 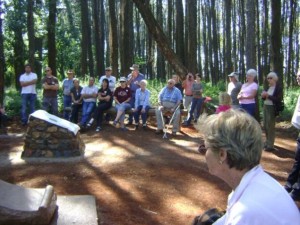 of Charlie Bristow. Sadly, the Hotel is no longer open, because surely there would be no better place than the old saloon in wish to be told about the notorious Captain “Bulala” Taylor whose spirit may well be the shadow next to you! The old buildings are in remarkably good condition, due to the concern of the late Poog Henning and the present owner Carl Henning and family, and quaint signs mark the Saloon, Shop, Capt. Taylor’s Rooms and the Cmdt Beyers Piano Room and others. Delightful stories are told of the Wiley, Cmdt. Beyers and the Union Jack that Mrs Bristow was sewing and the near disaster (or Interrupted Melody) in the Piano Room!

Next Stop is just up the road at the monument to the van Staden family. The father and both his sons, the younger, about 12 years old and dying of fever-were shot by a firing squad of the BVC. It is difficult to comprehend why Trooper Botha (a “joiner”) actually requested permission to shoot the ailing youngster!

The next stop is at the Alexis Thomas Hydro electric Mill. It is interesting that Elim Hospital had electricity long before the town of Louis Trichardt! Could the Thomas family rightly claim that they were the longest (50 years) private suppliers of electricity in South Africa?

The short drive to the house of Col. Adolf Schiel at Rossbach passes through the national monument of Lemana College – established by the Swiss Mission at its present site in 1906 and named after the view of the early morning mist in the nearby Levubu valley that reminded them of the lake of Geneva. The beautiful stately church at Lemana built by the expert church builder, Metzenen, is well worth seeing.

The historic home of the Schiel family with its fortified veranda walls, complete with recessed openings for cannons, commands a fine view over the Great Spelonken, which so nearly became the realization of Joao Albasini’s colony of Santa Luiz! The original Lemana building – once Col. Schiel’s stables with its amazing architecture, is on this site.

The stories of the Schiel family’s involvement in the Anglo Boer War and the likelihood of Mrs Schiel’s affair with Handcock of the BVC are all fascinating.

The tour heads back towards Lalapanzi Hotel and the last stop is on the farm Vliegenpan. It is here, we believe, that the Rev. C.A.D. Heese from the Berlin Mission Society was murdered, together with his Ndebele driver. All logical evidence points to the BVC, and in particular, to Handcock as the murderer. This act was possibly the last straw that led to the arrest and subsequent court martial and execution of Australian officers Morant and Handcock.

The Battle of Vliegenpan took place in the valley just beyond the rocky ridge of the western edge of the Spelonken, where Cmdt. Beyers had his men so perfectly placed. The superior British Force was certainly not expecting Beyers to be there and they were totally unprepared for the ensuing attack which drove them all the way back to Dwarsrivier. The battle scene has been captured and is on display at the Lalapanzi Hotel Skirmishes Museum. Monuments in honour of the Soutpansberg Commando as well as the Rev. C.A.D. Heese have been erected at Vliegenpan.

The tour arrives back at Lalapanzi Hotel at about 16:30 just in time for a cup of tea (or a cold one!) and a lot of talk about the emotions played upon during the day.

By prior arrangement, the flamboyant Professor Louis Changuion can be prevailed upon to present a slide show which places yet another cherry on top of a most interesting and unique tour!

The route can easily be tailored to include other points of interest, such as the Elim Hospital Museum, the Piet Otto Heritage Agricultural Collection and the nearby Valdezia Monuments and Graves.

Want to read more, read Charles Leach’s book for the South African version: The Legend of Breaker Morant is Dead and Buried.